Social Distancers of the World Unite

“The trees are coming into leaf/like something almost being said.”

A drop of poetry there to start you off this morning, and no better start to any morning, I say. Yesterday was national poetry day in Mexico, which must be a bit of a nuisance for people from Derry or Newry (neither of which are real cities, by the way). I mean, just say the prevailing wind blows a sonnet or two, or even a wispy simile, over the invisible border just outside either of those two conurbations? What is it going to do? Whither on the vine because some eejits nearly a century ago thought it would be a good idea to stuff two different jurisdictions into an island with a population smaller than that of Manchester? (Big guys, those Machunians.) Or hope that one of the inhabitants of the non-city has enough of the poet in her to catch it, shove it into the back of the car and drive it – in defiance of lockdown regulations – back over the border to safety in Mexico? Don’t hold your breath waiting on that one, is my advice to wind-blown sonnets and similes: there are about as many poetic souls in Derry and Newry as there are intellectual heavyweights in Stormont.

Philip Larkin, who said more than his prayers, wrote those lines quoted above, and he knew what he was (not) writing about. Because that is poetry for you in an acorn. (Hands up now if you thought ‘nutshell’ was about to come out of the automatic typing I practise here each day? Thanks for your honesty, now put this Dunce’s Cap on and sit at the back of the class facing the wall for the rest of the day.) The ineffable; things almost said: that is poetry’s job. If you want to actually, unambiguously state something, use prose (if you have been properly trained in the use of that weapon), or an Excel sheet, or something. I should know, I won a cup once for the ineffability of my poetry. Not that type of cup, you mug! This type of cup. 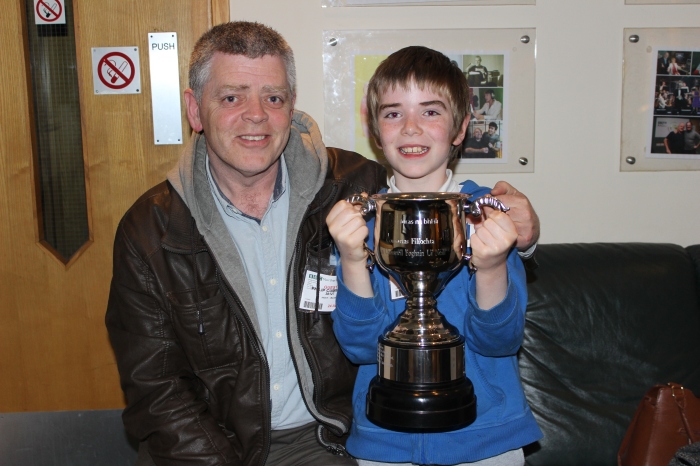 (The wee lad in the picture is also the subject of the winning poem, Connla, and related to me by marriage.)

So national poetry day in two thirds of this nation yesterday, international workers’ day in no thirds of it today. Because, while most of the rest of the world sticks its public holiday to celebrate workers on the actual day designated for it, the Mexicans, in their wisdom, have decided that the workers would prefer the Monday nearest to 1 May off rather than the actual day itself. Did anyone ask for the workers’ opinion on this? I, for one (and don’t be smart now, I do actually work, just not when I am auto-typing this stuff), do not recall a vote on the subject. Meanwhile those who think they are in charge of the Dis-United Kingdom have, in their wisdom, decided on a two-for-one package and moved the public holiday for workers to next Friday to double up as a celebration for VE Day. Again, I do not recall completing a postal ballot on this topic, do you? (Rhetorical, Shirleen, do not answer that one: I am still waiting, however, on your answer to what the essential elements of an Ulster Fry are.) And why on Earth (or on my own planet of Pluto, for that matter) would I want to either celebrate or remember a war that ended 75 years ago and one in which my team was not even playing? There are a sufficient number of wars currently going on in the world to exercise the energies of anyone who is actually interested in stopping wars, but maybe that is not the actual point of VE Day celebrations? [bit cynical there – Ed.] (not cynical enough – me.)

So anyway, here is my plan de guerre regarding this omnishambles of a fruck-up around a public holiday for workers, of which I am one. I am doing shite-all work today – I will virtually turn up in my virtual workplace, but not a drop of work will pass my lips, in  solidarność with my fellow workers in countries that know how to read a calendar. Similarly, as I do not recognise the Border (well, not since it got its hair cut), I will be doing fruck-all squared work on Monday to keep the Mexicans company, and then next Friday, because I am, if nothing else, a law-abiding citizen, under mis-government orders to boot, I shall officially do not one jot of work.

We will see how that strategy fits their ‘two-for-one, only give them one day off’ plans. You are more than welcome to steal this plan and adopt it as your own. Just don’t tell the KGB where you got it from. Tomorrow, when I am off, I will do a bit of work for youse and show youse that evidence of the Russian interwobble spy.

Oh, Boris made his come-back, stand-up comedy appearance last night. Not his best set, by any means, but cheering nonetheless to see the dancing bear back on its feet. Now which orifice did I stick my Maypole in after I was finished with it last year? There are certain politicians who sorely require to be beaten over the head with it.